It looks now as though the 2013 French wine harvest is approaching average size for recent years with an increase of 11% compared with the record low harvest of 2012.

The long,wet winter helped replenish the soil with water, which allowed the vines to withstand the scorching temperatures of July well. Unfortunately, the end of July and the first days of August saw violent hailstorms in the French vineyards which will reduce yields considerably.

The weather in late August suggests a degree of optimism, especially the hot days which have been offset by cool nights and a light wind which is able to ward off fungal diseases and promote slow maturity.

Overall, 2013 should be a very interesting vintage year with the daytime heat offset by cool nights in August for a slow and good-quality phenolic maturity. However, no definitive conclusions about this later-than-usual harvest may be drawn until the grapes have been picked. Storms could still change things.

Although we do not supply wine itself remember us for all your Wine Accessory requirements. 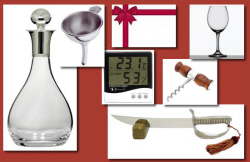